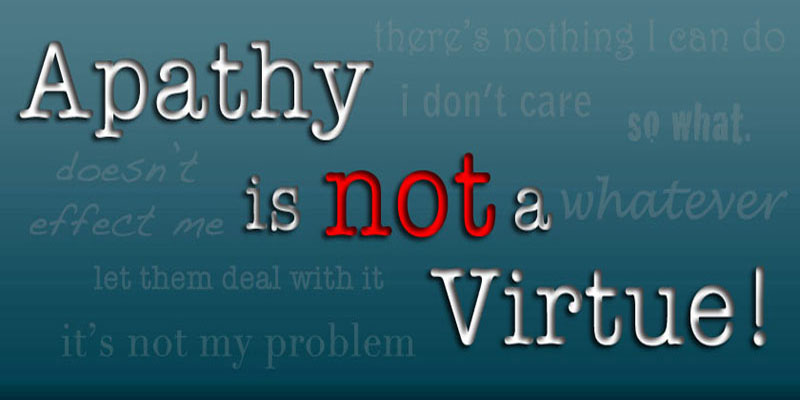 Now I’m not one to moan about the injustices of life, I’ll just get on with it and I’ll figure it out in the end. Lately though, I’ve become quite a bit more proactive. Why only now? Well, it takes time to mature and reach the right time in ones life for everything to come together. It is time for a change. I suppose that this article is also intended to cover an aspect of leadership. Not in terms of leading a team in a business to achieve business harmony or to be proactive with the provision of vision, support and challenge. This form of leadership is to encourage the like-minded to contribute. What I’m going to write about in this article is the pervasive apathy in our society, a social apathy.

As we all know, social media has become a major force in shaping public opinion and as such can potentially be manipulated. Optimistically, social media brings to the fore issues that years before would have remained safely hidden. We only have to scan quickly through Facebook or Twitter to quickly find evidence of wrong doing by the powerful. The sad thing is that the issues that seem to go viral are mostly superfluous stories. Cue the cute baby, puppy or kitten stories.

Oh I know that social media can and is great fun and these types of stories have their place, I don’t have a problem with them and enjoy them enormously, I like and share plenty of these posts myself. What mostly concerns me is the apparent lack of balance, which seems to me to be indicative of the social apathy. We, as citizens, have a moral and social responsibility to be concerned, to ask questions and demand answers. One of the three cornerstones of a true democracy has been defined as a free press. See Definition of True Democracy. Social media is now also in a position to assist and participate in becoming the guardians of democracy.

Where to begin? Actually it’s quite easy. When I read through discussions on Facebook, LinkedIn or Twitter, I try, often, to actually give meaningful comment on a post that I have an opinion about. That’s not to say that I don’t sometimes post a monosyllabic reply. Of course I do, after all it’s also supposed to be a form of entertainment too isn’t it? Quite often, I will also find something slightly amusing and like or share it. But when I come across a post that demands a meaningful comment I’ll spend five minutes or more of my ‘precious’ time thinking about what I want to say and then post.

A good and recent example is the story about the apparent gagging of The Telegraph daily newspaper in the United Kingdom. Peter Oborne, talking here about corporate influence on the press with the non-profit organisation 38 Degrees. Now, whether you agree with him or not just isn’t the point. The problem lies in most of us, we just don’t seem to be at all concerned with this potential eroding of the freedoms that we take for granted. At the time of writing, the story has had just 10,398 Views, 440 Likes, 8 Comments and 195 Shares (via 38 degrees Facebook page). Quite respectable figures don’t you think? Well not really, considering the seriousness of the allegations.

Social media today gives us all a voice; never before have we had the opportunity to influence society at large in such a way. Anybody can post an article or write about the things that have happened to them personally or in the news. Unfortunately, the vast majority are ignored, perhaps a few acknowledgements from friends and family. There is a terrible apathy running rampant in our society, it’s as though the majority either don’t care or are too ignorant to understand. I believe that the most common mental attitude today is to simply ignore anything too difficult. The “What can I do anyway, I’m just a normal person?” excuse just doesn’t cut it anymore. Honestly if everybody thinks this way and ignores the social and moral injustices in the world then we are really in deep trouble!

Perhaps fear of posting a comment that may be ridiculed plays a part of this lack of involvement? Maybe most believe that they have nothing relevant to add? I believe that everybody has a valuable opinion, just because I might not agree with it doesn’t make a persons opinion worthless does it? But what I really think the problem is is that people just don’t care enough. They have become too immersed in a society where the small mindless pleasures have become much more important to them than the truly important issues of the day.

Isn’t it a sad state in our society when the endless cycle of celebrity marriages and divorces never fail to garner more attention in the general populace than atrocities carried out by this or that group? Our society happily gorges itself on trivia while at the same time completely ignoring social and moral injustices that will directly affect them and generations to come. Be it concerns over the environment, the latest banking scandals and criminal negligence by those in positions of authority or any number of other issues that affect the fabric of society. The apathy of the general public ensures that those responsible will not be held accountable and that lessons will not and never can be learned.

What can we do? We encourage debate and meaningful discussion; we coach those in our circle to open up and give their opinion, we need to take time out regularly to think and react proactively. When we read an article or see a news story that concerns us then talk about it with family, friends and colleagues. Join groups that are concerned about the same things that concern you. For example, 38 Degrees for political debate or Wake up: The World Needs You if that interests you. There are countless other ways and groups to become involved with. Never keep an opinion to yourself. Share it, please!

One small caveat, try not to overdo things either. Be careful that you don’t become a bore, it is all very well to become more proactive but if all you ever talk about is the serious side of life then people naturally tend to filter you out. Like everything else in life, balance is the key, be self aware and you won’t go far wrong.